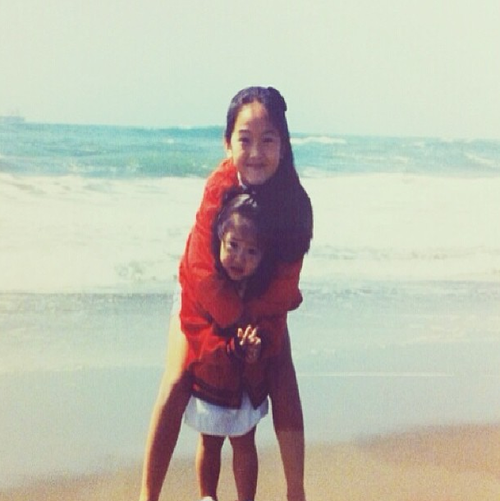 This is a story about my sister, Jessica. My sister was so mean to me when I was little. It was just so unfair how she always towers over me and looking down at me with her evil smirk. She was so mean that she always took what’s mine, like my toys, my clothes and my coloring books. Worst yet, she even took my bottle which was my most precious item at the time and drank the milk till the last drop. She was such a meanie older sister.

I hated her for about an hour for it. Even though she was huge and mean, I just can’t bring myself to hate her for too long. Because whenever I cried, she cried too and soon it became a crying contest between us two. And I usually lost the contest and stopped crying first, because she would hug me and kiss my cheeks.

We always do everything together. Now that I think about it, she just liked to drag me around like her little sidekick so that she could bosses me around. But I did enjoy being her little sidekick. And the time I spent with her was a huge part of the reason why I had such a happy childhood.

I was still young when I was picked to join an entertainment company, and the whole thing scared me. I cried when I saw the cameras, and I cried harder when the strange old man tried to talk to me. I was so shy back then. That was when our parents offered them my sister instead. My sister stepped forward, and she didn’t hesitate to agree to be a trainee and took my place, because I was still too young back then. So she decided to enter the unknown world of entertainment because of me, and to be by my side. In other words, she was like Katniss to Prim.

As time passed by, we both grew a little older every day and every year. And thanks to the amount of milk I drank, I eventually became taller than my sister. She’s a dwarf compared to me.

My sister was so passionate in making her dream came true and soon her dream became my dream too. Seeing her working hard every day was such an inspiration to me and it made me want to work hard as well.

She became busier as she rises up to be one of the most successful in the nation and even Asia. We spent less time together and I realized how much I missed my meanie sister.

When I first debuted, she was there to support me. I was quickly labeled as her little sister everywhere I go. She taught me all the things she knows and watched me grow, either making mistakes or making my moments. She stood by me and defended me when the current became fierce. She put umbrella over me to protect me from the sun, even though I’m taller than her. And when I was finally able to stand on my own, she watched over me with a proud smile that now replacing that mischievous smirk.

As time goes by, my sister continues to chase her dreams. And soon she made her other dream came true, which was starting her own business. I’ve seen that look in her eyes before, the same one when she was practicing her dance or belting out her sweet voices; that fire and passion that was bubbling from within her. She found a few people she trusted and then begin writing the next chapter of her career. Although she was busy, she tried her best to manage everything.

She became very successful, and I was also dragged along into her playground. And so this little sidekick got some success of her own as well.

But we can never predict what will happen next. We thought we had it all planned out but we forgot that He is the planner of us all.

The ladder that my sister climbed so hard through the years suddenly crumbled under her feet within seconds. She didn’t even realize when the ladder begins to rot from the inside. She thought everything was fine, and that the ladder was going to support her weight till she reached the top. Maybe she fell because she carried too much weight, or maybe the ladder itself had broken apart, but things just happen that way. My sister fell down hard to the ground. And then everything changed.

It hurts me so much seeing her in pain. Though she kept telling people she was fine and that it was okay to fall sometimes, I know it was all just another layer of her thin mask.

I wish people knew how fragile she was. She cried when it was only us two in the room, and I usually cried even before she does. We would hug and none of us told each other to stop, because I can only stop crying if she stopped first.

But my sister is no ordinary sister. She is cool and great and would win the World Sister Championship if there ever is one. She picked up the pieces and moved on. She said to me it was okay to begin again and told me to be strong. It was funny because I was supposed to tell her to be strong instead. She smiled at me like nothing happened and soon we were dancing and laughing in the living room like nothing else matters.

I guess it’s true that nothing else matters. As long as we both know that we’re always going to be there for each other, I believe we can take on whatever hurdles the life throws at us.

Maybe things are hard for her right now, but it’s okay because this time, I will protect her. 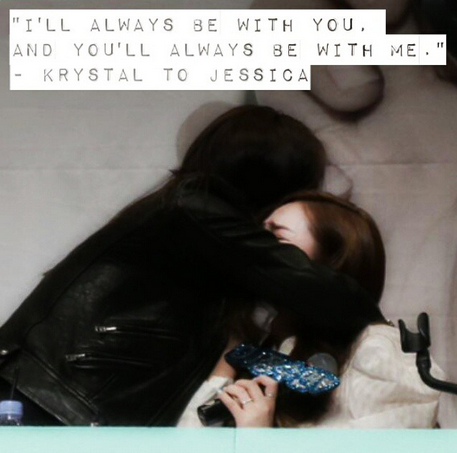 We’ll always be with you. We got your back.

Can I join, Jessi?

Jung won. Though the competition was tough.

we heard them saying that they could make an international worldwide album and how they always do normal silly girl stuffs. MYX News has more of their silly interview.

LMAO these sillys..
T: Most silly(Hyo), 2nd most silly(Soo), 3rd most silly(Yoong)..well, everyone is silly
SY: No one is quiet.

Awwwww.
Sisters are the best :’)