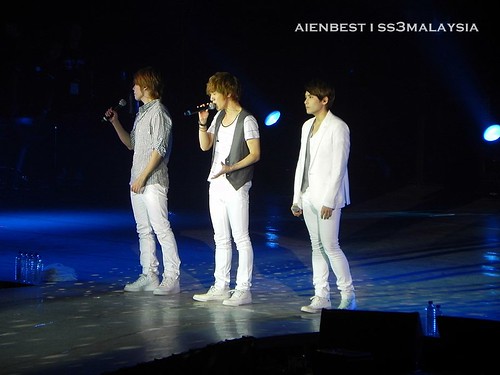 I went there with my sis and arrived there late and the fansigning was almost finished. The securities forbid us from entering even though we have legit tickets. I was very disappointed and whined by the door. Lol. Luckily there was a nice female Digi staff that helped us to get numbers and eventually into the line.

Because we arrived late, we didn’t manage to buy the CDs; we didn’t wear the pink tag or have the free posters. The security asked us to leave line. I asked a few fans there to sell their albums to me but they all refused. ): Luckily the nice Digi staff earlier heard us and gave us two posters to sign! Yay! Gotta love Digi customer service <

The first was changmin. And i asked him to write my name and spelled it for him. A.I.N but he looked clueless but adorable. And he didn’t write my name..

Then I was dragged to the next person, Jo Kwon. I don't know why but I felt comfortable with him.

Me: Thank you~
Kwon: *looked at me in the eyes* Ah, thank you so much! (his English was really good)

I swear he made my heart beats faster. He looked so much better in person. Ah Kwonnie ❤

The next one was Jinwoon. Aka my favourite.

Me: Thank you, er..Jinwoon-shi!
Jinwoon: *looked at me and smiled then nodded.*

I think I fell in love with his eye smile.

Me: Kamsahamnida! *blurted it out randomly*

The last one was Seulong. Aka my second favourite.

Me: Thank you!
Seulong: * finished signing and handed the poster to me*
His hand was sooo near to mine!
Me: Can I shake your hand?

But the staff pulled me away. T.T

It was an unforgettable experience for me since it was my first fansign. But it amazed me how friendly 2AM were even though they were tired.

We waited by their van at the entrance just to get trolled by the security. Lol. Luckily we overheard that the boys were at the parking lot, B2 and hurriedly went there with a group of fangirls.

They were all just leaving, all crammed in one white van. I saw Seulong who was sitting by the window, and he was smiling and waving at us. Jo Kwon who was sitting in the middle turned around to wave to us as the van leaves.

lol, at least my car was photographed with their van. The orange Myvi is my car.

Can’t wait for the showcase tomorrow.